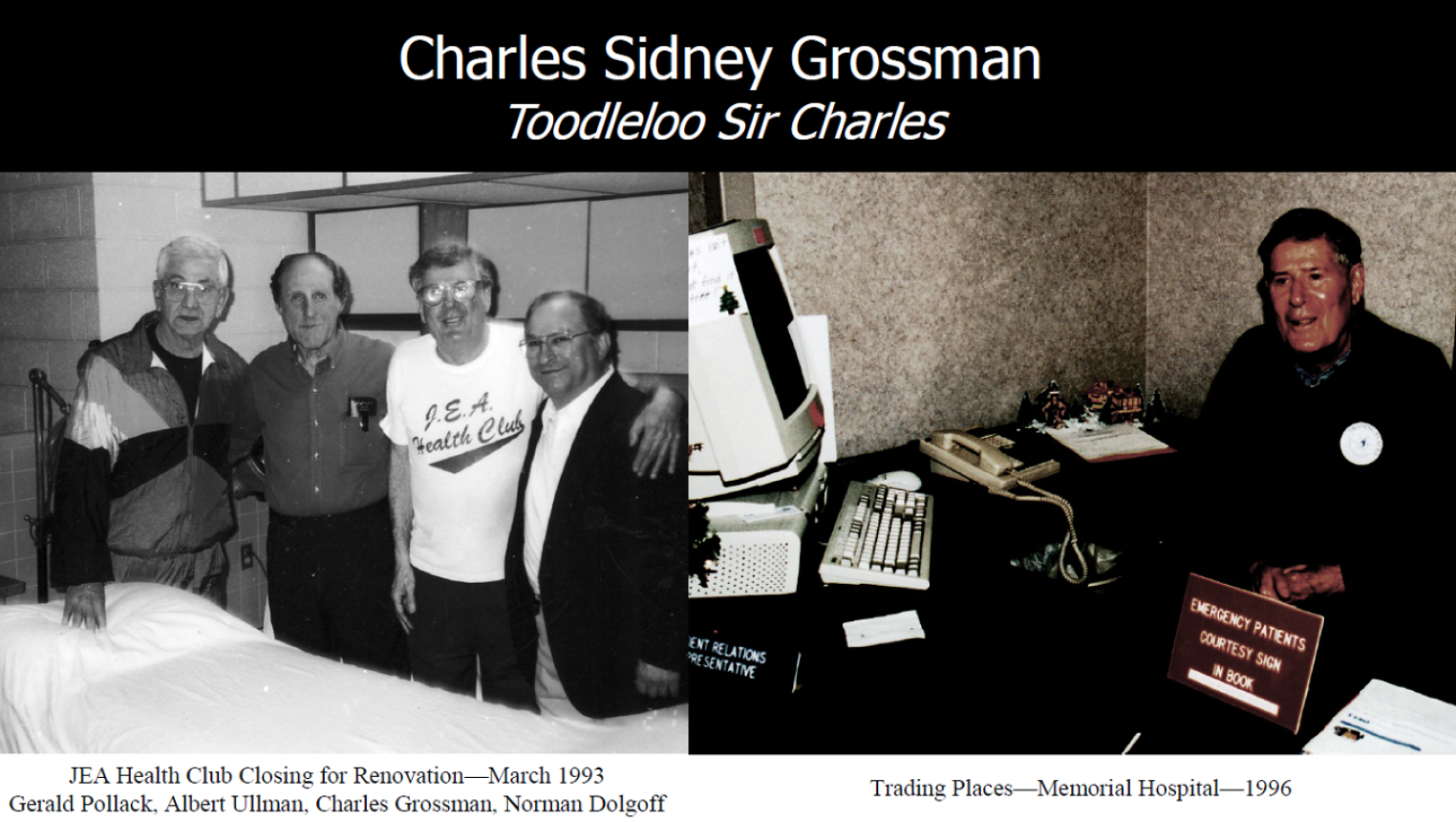 Many years ago, Reader’s Digest had a regular column called “My Most Unforgettable Character.” Charlie Grossman was mine, as I suspect he was for most of us who knew him.

For us Jewish kids who grew up in Savannah in the 1950s and ‘60s, the Alliance was the center of our universe. (No one called it the JEA back then.) That is where we played sports—remember we used to have a tackle football team?—attended Hebrew school and day camp, went swimming, had our Cub and Boy Scouts and AZA/BBG meetings, and enjoyed so many other activities. (Remember the gameroom and the pool game invented by Bill Alpert called “chip”?)  But mainly, that’s where we went to meet and hang out with our friends and socialize at the Tween and Teen Canteens. And that’s where we would see Charlie Grossman. Always. A permanent fixture.

My first memories of Charlie were of his being in charge of the basketroom, where we kept our hardly-ever-washed gym clothes in those iron baskets. That’s where you would see Charlie kibbitzing with everyone—young and old—but I especially remember as a young boy being so impressed with how Charlie always had a kind word and funny joke or witticism for everyone, especially for the youth, in whom he took a special interest. I marveled at Charlie’s photographic memory. How could he know everyone’s basket number by heart? (Mine was 150.) Harry Slotin remarked that Charlie, due to his very poor vision, hadn’t actually memorized all of our basket numbers; he could identify the owner of each basket by the basket’s unique shmeck. 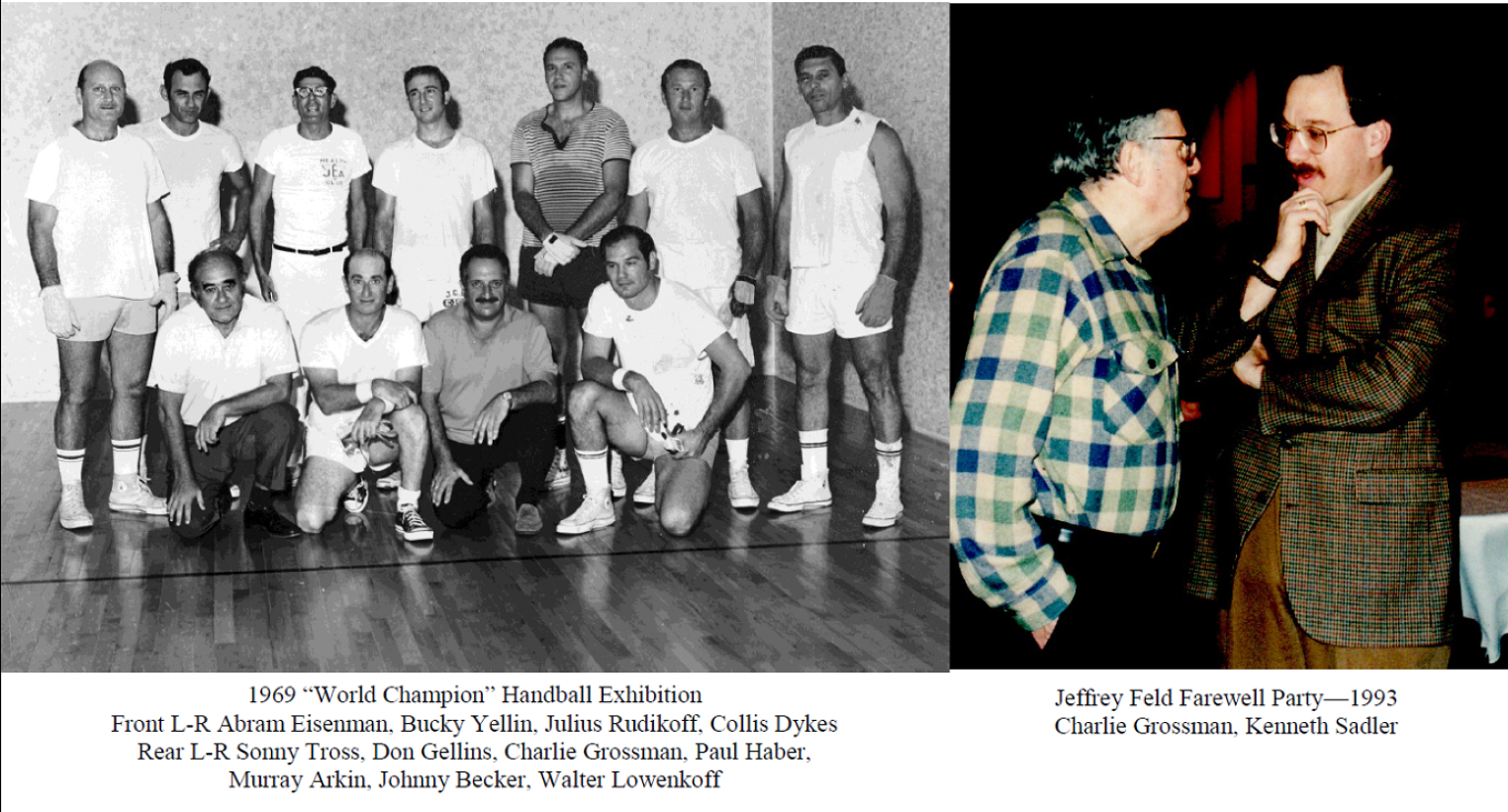 But Charlie never let his poor eyesight hold him back. He read everything, especially newspapers. I remember how, in the old days, he used to hang out at Lamas bookstore downtown (AH), later at Publix, reading all the newspapers, while kibbitzing with the staff and customers. Occasionally, he would even purchase one of them. Remember how he used to bring to the health club those rolled-up newspapers, drenched in wintergreen, which he stuffed into a paper bag and into his locker? (The Miami Herald was his favorite.)

Charlie had a brilliant mind to go along with his quick wit. He was an authority on everything, from sports to current events to music to politics. He learned the anatomy of human body that would rival the knowledge of the finest orthopedic surgeons. He was everyone’s unofficial doctor. You would kvetch about some pain or other, and he would instantly diagnose what you had and how he could make it better. And he could, once he got you on the slab, with those magical hands.

After Charlie attended masseur school in New York, he graduated from the basketroom to the health club—first as masseur (under the tutelage of Irv Stark), later as health club director. With Sir Charles at the helm, the Alliance health club became the place where the beautiful people came to shvitz. Now there was a place where you could really let your hair down—as well as your gatkes—and kibbitz with world-class kibitzers. I love the fact that there were no class or age distinctions among the members. The older guys treated you as an equal. 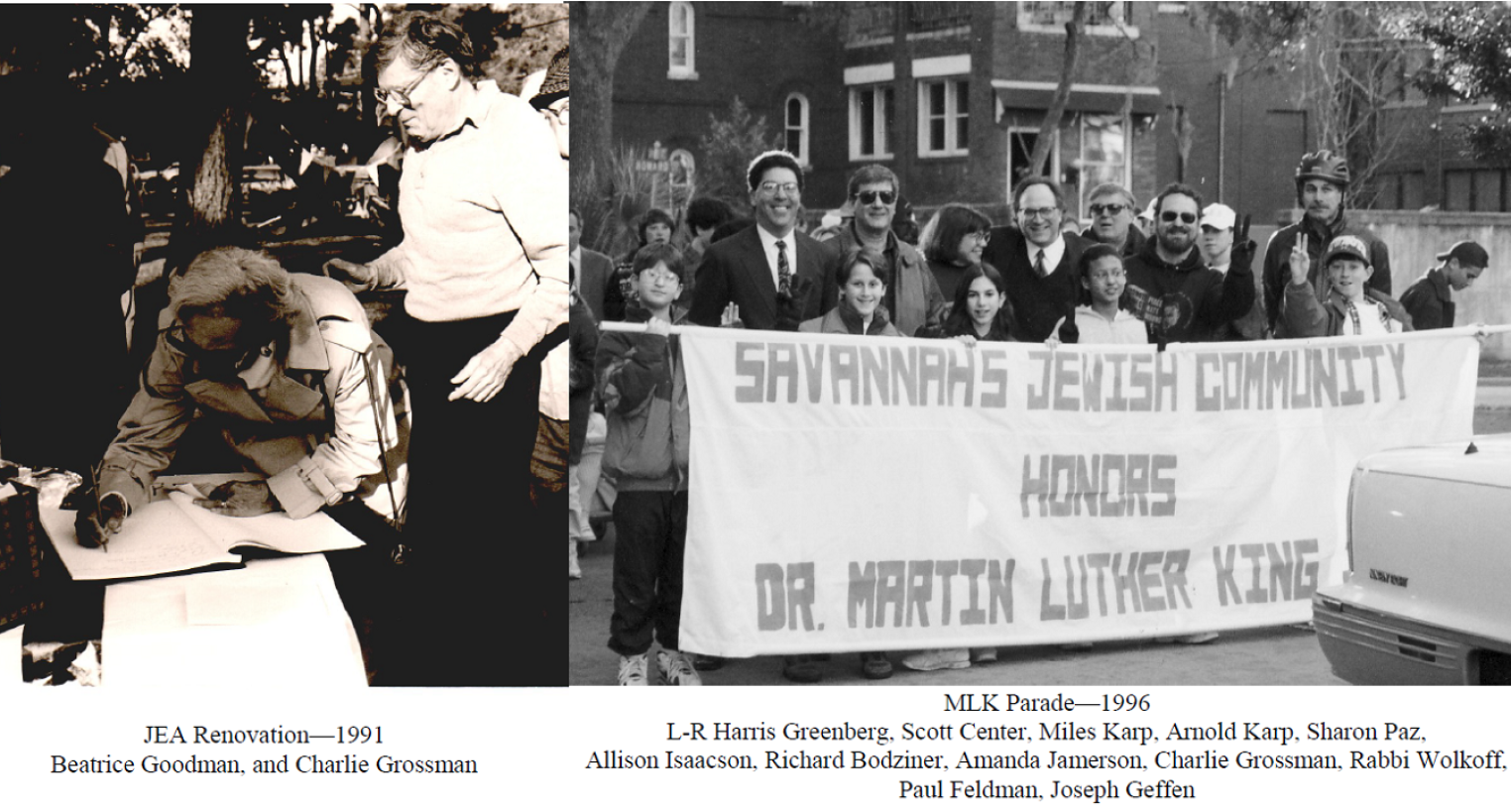 Charlie had those long, bony fingers and showed surprising strength for such a skinny guy when he gave you one of his patented massages. He was a very hard worker, often servicing as many as 13 “cadavers” in a row on a typical Sunday. (“Can you take one more, Charlie?”) Charlie’s standard massage was supposed to be 25 minutes, but they usually ended up lasting 45 minutes to an hour, because Charlie could never finish his monologue in only 25 minutes. The great thing about getting a massage from Charlie was that he required no feedback. There were no lulls in the conversation. You just relaxed, tuned him out for 45 minutes, and let him talk, all the while enjoying the best massage in town. What a mechaya.

Talk about talk. If talking were an Olympic event, Charlie would take the gold in every category; from the one-liner witticism to the monologue to the marathon, in which he could talk non-stop without a break. All original stuff. And like a chess grandmaster who can play multiple games simultaneously, Charlie could carry on several conversations at a time: While discussing the state of the world with his cadaver on the slab, he would tell Leroy we needed more clean sheets and towels and powder in the bathroom, greet a new arrival, and, after spotting out of the corner of his eye someone grabbing a Fresca from the drink machine, Charlie would admonish him to be careful not to slip on a banana peel. (“I got you on the books for four drinks.”)

Charlie never let his poor eyesight slow him down. He walked everywhere, sometimes even from the Alliance all the way downtown if he missed the bus. And once he got downtown, it was an all-day event, because Charlie knew everyone, and everyone knew Charlie. When asked how he got somewhere, Charlie would point to each of his legs, “In my Cadillac and my Lincoln.” And we would all hold our collective breaths watching Charlie, with his characteristic bounce, dodging heavy traffic in the vicinity of DeRenne and Abercorn. To Charlie, Abercorn Street was “The Ho Chi Minh Trail,” where snipers lurked. (“There’s a lot of love out there. If they miss you, they back up.”)

Charlie was an original. He was a philosopher. (His idol was the longshoreman philosopher-writer Eric Hoffer.) He was clever. He was funny. He was a mentor, especially to the youth. He was a role model of goodness and kindness. He refused to give into or make excuses for having to contend with his compromised eyesight. He was the best ambassador the Savannah Jewish community ever had, both within the Jewish community and to the non-Jewish community.

So what are they gonna say about Sir Charles? They’re gonna say that while he was just passing through, he made an impact; he made us think (“What’s it all about?”) and he made us laugh—often at ourselves. He was everyone’s Most Unforgettable Character.

So Charlie, we’re going to miss you. Tudaloo. 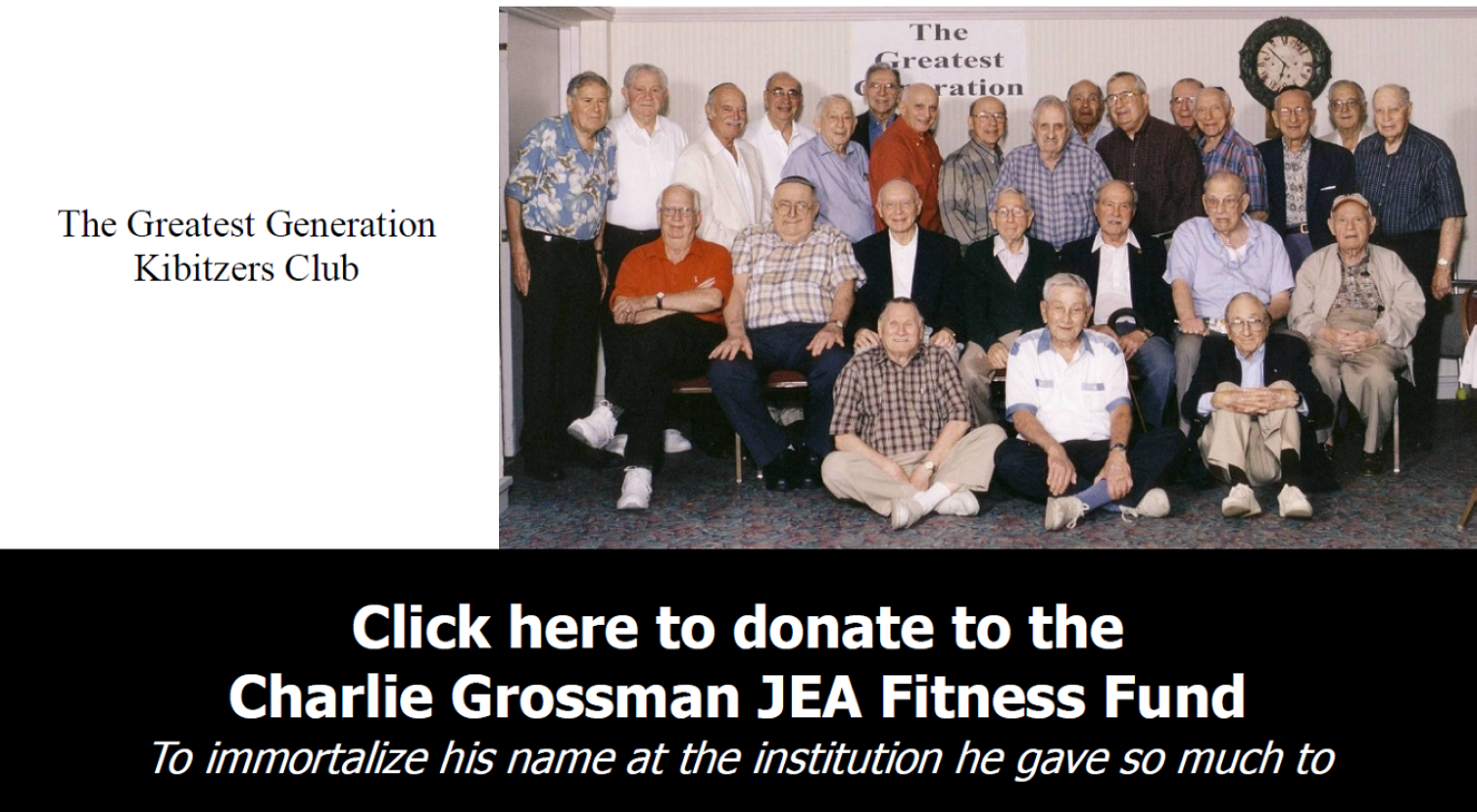