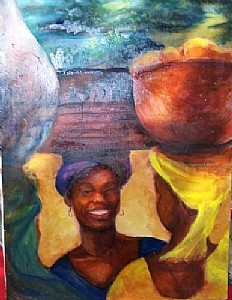 In 1965, Kenneth Martin was working as a welder at a Ford Motor Co. plant in Detroit when his life took a tragic turn.

Coming home from work one day, the 22-year-old’s car hit a patch of oil on the freeway and skidded, causing a catastrophic car accident.  Martin was thrown from his vehicle and suffered numerous injuries, including a devastating spinal cord injury that left him partially paralyzed.

During his recovery process, Martin discovered the therapeutic power of art, studying with several different instructors who opened his eyes to a whole new creative world.

“After my accident, I had to redefine who I was and what I wanted to do,” he admits. “It was a process. I began to see how art was a form of expression.”

He’s been painting ever since. Today, Martin serves as an art instructor at the VA Center and the Jepson Museum, helping wounded warriors get in touch with their own creativity.