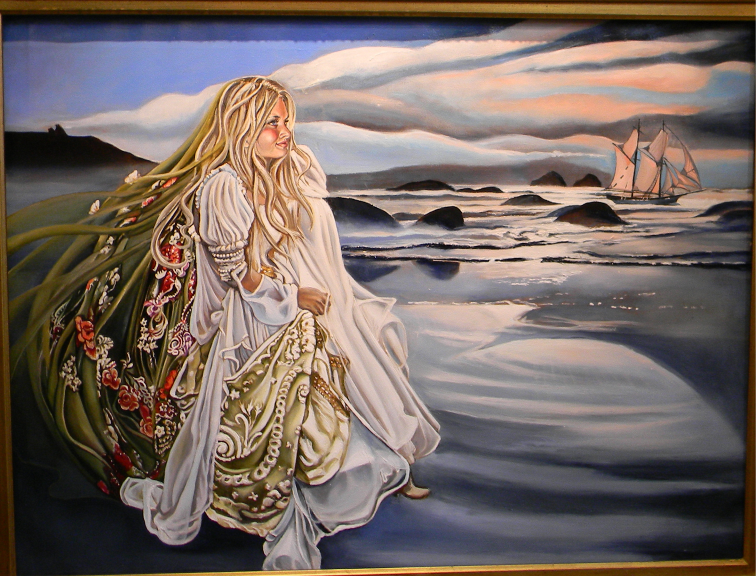 Oksana’s earliest memories are of being two and trapped inside a body cast in a Ukrainian hospital. She spent the next three years immobilized in a hospital bed. The nurses took pity and gave her paper and pencils to help pass the time. She learned to escape the hospital with her imagination and her art.

At five, Oksana’s cast was replaced with a brace. With no strength in her legs, she had to be carried home by her father. At school, Oksana’s teachers noted her exceptional talent in art. At eight she was admitted to the Children’s School of Arts in Ternopril, Ukraine. When she graduated she had two degrees: her high school diploma and a degree in Art. She continued her studies and received her degree in Art and Architecture in 1990.

Oksana worked as an architect for 15 years; first in Ukraine, then in the U.S. When the economy slowed, she returned to her passion for painting.

While Oksana was growing up in Ukraine, it was isolated from the outside world. Fashion was in a vacuum. From the first time she saw an Italian Vogue, she was in love with the beautiful colors, patterns and styles. The fashion of Vogue strongly influences her subject matter.

No matter the medium, Oksana always focuses on fine detail. The beauty, fragility and strength of women and flowers are recurrent themes in her work. Her paintings express her feelings that we should work to regain harmony with our surroundings.

Oksana uses a technique developed by the Flemish masters. It uses seven layers of paint to create transparent fabric-like veils, to capture the colors under the skin and to produce realistic faces. This technique is time consuming with each layer having to dry before progressing to the next. The paintings can take months to finish.

This is Oksana's second show at the JEA!